"A pretty lie is more easily believed than the ugly truth."
- Ah-Tazza's Leaf

Eez`Inock, currently referred to as Truthstone, is a chemical compound discovered by the ancient Yam`rii tribes. To better understand the creation process, one must first learn the medicinal practices of the tribes. 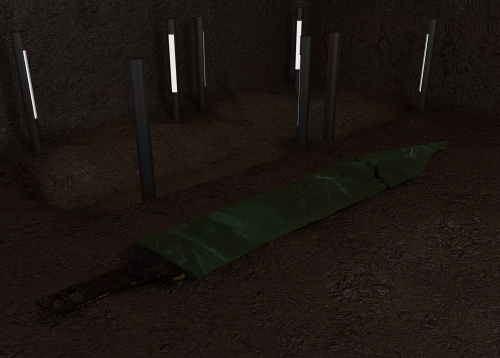 Truthstone ceremonial knife found at HAS39-f. High humidity is credited for the preservation of the find.

The preservation of resources was a daily way of life for the Yam`rii tribes. Very little was wasted, because it was part of Kiitchich. To destroy something meant that Zeetchich would gain power, and the belief led to some customs still used to this day.

When a tribe member died, it was common practice that the other members eat the remains. The belief of serving the tribe after death was encouraged as a way to honor the fallen and let another live for a day. Refusing to eat a corpse was a way to show disapproval of the deceased, dishonoring them in Void for their actions within the Eye. This also applied to combat, and numerous reports of Yam`rii eating their former enemies on the battlefield have been documented.

The standard medical practice of the Yam`rii is unique, even in current cultures. The Azaetzil would list the ingredients needed (if none were available) to the Chayich-ish, who would gather the needed supplies. The Azaetzil would then eat the supplies quickly and wait a short while. He would then regurgitate the mixed liquid onto the affected wound, not only cleaning it, but also applying the treatment in a singular action. While this method was only used for exterior wounds, the action would later contribute to the Truthstone discovery.

When a tribe member was diagnosed with a terminal injury or disease, he served the Azaetzil as a test subject for various experimental treatments. The subject was given varying organic matter to consume and regurgitate, with the results being noted by the Azaetzil. This not only expanded the medical knowledge of the tribe, but also helped differentiate the various poisonous plants and animals on Huk.

As possible combinations of experimental tests grew thinner, the chemical formula for Truthstone was discovered. Utilizing at least half a dozen Yam`rii, they all consumed different components and regurgitated them into a clay container. The container was then stirred, producing a green liquid with yellow strains running through it. After several hours it hardened into a solid material, but retained a high moisture content for several days.

Originally, Truthstone was created into large thin sheets and placed at the perimeter outside of the village. It was then loosely covered with foliage as camouflage. Intruders (or predators) would step on the Truthstone, which gave a loud cracking sound, alerting the sentries in the village of danger.

Over time (and a series of unfortunate events), it was discovered that Truthstone created an allergic reaction to those who were able to manipulate the Force. The severity of the reaction was directly dependent on how powerful the user was, ranging from mild headaches to uncontrolled use of the Force itself. Zeet-ish`Tchizik finally had a tool to detect the Zeet-ish influence.

Having the ability to detect the Zeet-ish influence was a gift from Kiitchich, but actual use was problematic. Truthstone was far too brittle to be used in warfare, and the amount of work needed to create it meant it could only be made in small amounts. The target of the Truthstone had to physically come in contact with it, which typically meant it would be destroyed if they were Force users.

Truthstone had found a place in interrogations, where the Force user was already bound. Small daggers made of Truthstone would be plunged into the helpless victim, then the handle broken off. The victim's blood would slowly re-hydrate the chemical mixture, and mix itself into the bloodstream, causing a slow and painful demise. The best use for Truthstone had seemed to be applicable only against immobile targets, which seemed contrary to the purpose of it entirely. Until it was used for other applications.

When applied to someone under the Zeet-ish influence, it was believed to be an allergic reaction, when in fact it is not. The midichlorians in the body begin to retreat from the Truthstone, and spread away from the affected area, which leaves adverse symptoms in the carrier. The discovery of this led to a change in how Truthstone is used, and a change in Zeet-ish`Tchizik itself.

Since the Force itself cannot be destroyed, the Azaetzil of  Zeet-ish`Tchizik agreed that it could be contained. Since the midichlorians retreat from the Truthstone, the Force user must be surrounded by it to keep the Zeet-ish influence inside the body. They gave the knowledge of Truthstone creation to the Sughis, who were charged with keeping it safe, but also developing a method to use it for containing Force users. The Sughis did not disappoint.

The Sughis had created two methods of containment, one for the deceased and one for the living. The reason for the varying methods are explained below.

When a deceased Force user is given to the Sughis, the Zeet-ish influence has already left the body. With reports of ghosts and resurrections, the body still needed to be contained.

"The Chayich-ish transport the remains to the Sughis, who then create the box for the deceased. They fill the container halfway with Truthstone, then place the remains inside. The box is then filled near the top and allowed to harden. The remaining space is then filled with more duracrete, and allowed to set. The large duracrete "brick" is then turned upright and a hole drilled to the semi-soft Truthstone. A decorative pipe is then screwed into the slab, and the slab placed into the floor. The Sughis maintain the burial tombs daily by pouring a mixture of wax and liquid gas into the pipe, and lighting it. For the average visitor, the entire process yields only a decorative floor mounted brazier. The true nature of most Sughis structures is that the flooring is constructed using dead Force users as a building material." - excerpt from Remembrance

The containment of a living Force user is slightly different. The unconscious victim is placed inside a special container, comprised of two layers of durasteel with a layer of Truthstone in the middle. The top of the container, which has a hole in the middle, is then placed on top. It then takes four dozen Sughis, working an entire day, to fill the box with Truthstone. The victim drowns in Truthstone, and the Zeet-ish influence forever trapped inside the corpse. A decorative pipe is then placed, and the entire "brick" is covered in duracrete, placed in the flooring and maintained by the Sughis.